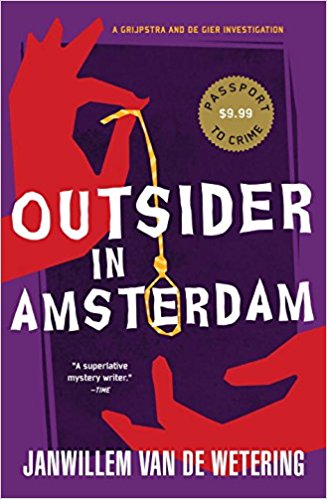 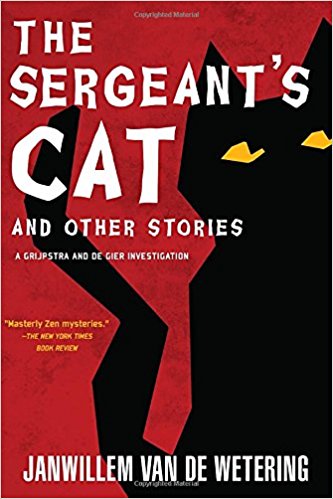 Thumbs up for Outsider in Amsterdam and The Sergeant’s Cat and Other Stories by Janwillem van de Wetering. Mystery.

I’m not a mystery reader, generally, but there are three or four authors whose books I love. The books of Van de Wetering – globetrotting Dutchman, erstwhile Zen monk, and part-time member of the Amsterdam Police Force – made me exceptionally happy when I read them in my teens, and they continue to make me happy as I’m rereading them now. There’s a quote from the New York Times that’s been used on the back of every American edition ever, but it’s exactly right, so I’ll use it here too: “Mr. Van de Wetering’s policemen are just as likely to…marvel at human nature as they are to shoot it down.” The detectives, Hank Grijpstra and Rinus de Gier, do solve murders, but along the way they philosophize, stop to pet the cats, and play some relaxing riffs on drums and flute. These books are not quite like anything else, ever. I can’t recommend them enough. (Though, perhaps don’t start with the short stories. They don’t give the full effect.)

The chief inspector stopped in front of a cactus that was nearly five feet high, a stiff giant noodle, pimply and dotted with sharp cruel hooks. He watched the plant with concentration. De Gier grinned. He had seen the chief inspector measuring the monstrosity, using a tightly wound measuring tape in a metal container, which could be released and sprung by pressing a button and which he carried in his pocket. De Gier knew that he carried the measuring tape at all times, for the pocket of his tailor-made expensive suit bulged. For years de Gier had suspected him of carrying a mini-pistol until he had seen the tape-measure one day when the door of his office had been open and its occupant had been indulging in his secret pastime. De Gier was sure that the chief inspector was sorely tempted at this very moment to produce the tape and measure the cactus, which should have grown another millimeter or so since the previous day.