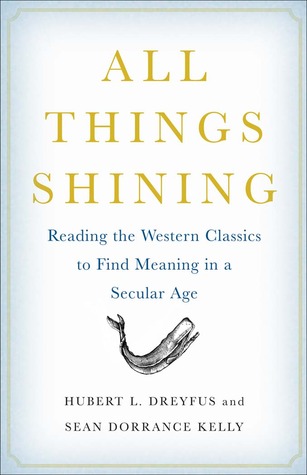 Thumbs up for All Things Shining: Reading Western Classics to Find Meaning in a Secular Age by Hubert Dreyfus and Sean Dorrance Kelly. Philosophy.

This was a very, very strange book. Imagine this: an attempt at constructing a careful, anti-nihilist, (self-named) polytheist, pro-craftsmanship life philosophy that can be practical in the modern age. Okay, that would be an interesting essay and I would read it. (I am myself a practical, anti-nihilist, polytheist Taoist craftswoman–albeit polytheist in a completely different way than they are using it.) And then! You make your argument in favor of this philosophy by using examples from Homer, David Foster Wallace, the life of Jesus, and ending with Moby-Dick. I am down with this; but, respectfully, it is batshit. The authors’ argument builds steadily on itself, although I think it is based on insupportable interpretations of literature. “Insupportable” not in the sense of being definitely wrong, but in the sense that any post facto interpretation of a philosophical worldview from limited historical text is immediately suspect. David Foster Wallace is one thing: he wrote essays and gave interviews; he spoke for himself. At the depth of several millennia, though, anything we think we know about the internal reality of Homeric Greeks is guesswork at best. Nevertheless, I permitted myself suspension of disbelief, and found this book enormous weird fun. Every time I thought I knew where we were at, on the next page my eyebrows would rise and I would mutter “WTF.” (I have only the greatest respect for philosophers who name a sacred phenomenon “whooshing”; clearly they are treating the world with the sense of humor it deserves.) I agree with a great deal of it, even though I think it’s wrong. You will know by this point in the review if you are the right audience for this book.

This Homeric conception of the gods puts other demands on the well-lived life. For if the best kind of human life requires the presence of the gods, then the best kinds of human beings must invite the gods by expressing wonder and gratitude in their presence. To develop an appreciation, therefore, for those situations in life when favorable things occur out of our control, and to develop a sense of wonder and gratitude in the face of such situations – this too is required for a life well-lived. When we develop in ourselves the ability for this kind of wonder and gratitude then we become a standing invitation to the gods.