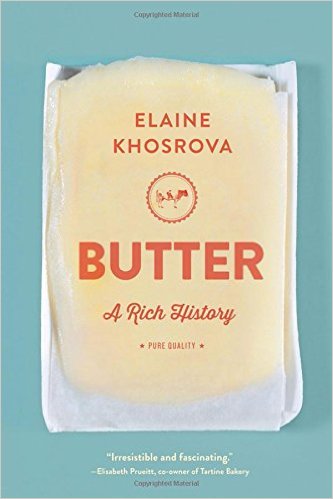 Thumbs up for Butter: A Rich History by Elaine Khosrova. History/food.

This is one of those books to which you should apply a simple test: does the topic sound at all intriguing? If it does, you will like this book. The world history of butter is a fascinating thing, and Khosrova does all aspects of it justice—from dairying itself, to the science behind it, to the changing interactions of gender and butter production throughout the ages, to the sordid and weird evolution of margarine. I do wish I had read the table of contents more closely to notice that half the book is recipes, which I don’t care about; the history part was so very interesting, I was disappointed when it came to an end!

In 1520, Martin Luther railed against such ritual profiteering; as described in Bridget Ann Henisch’s Fast and Feast, the outspoken priest wrote in 1520: “In Rome they make a mockery of fasting, while forcing us to eat an oil that they themselves would not use to grease their shoes. Then they sell us the right to eat the foods forbidden on fast days, but they have stolen that same liberty from us with their ecclesiastical laws . . . Eating butter, they say, is a greater sin than to lie, blaspheme, or indulge in impurity.” It seems hardly a coincidence that most of the dairy-rich countries producing and using butter were the same nations that broke away from the Roman Catholic Church in the sixteenth century. Paradoxically, the church’s early fasting rules also eventually helped to promote butter among the oil-and-lard-loving people in southern European countries. Alberto Capatti, in his book Italian Cuisine: A Cultural History, explained that for the medieval peasant and working class in Italy, good olive oil was a luxury they could rarely afford. Lard was their common fat, but since products of the slaughterhouse were forbidden on fast days, they were left with no choice but to use cheap foul-tasting oil. When the church gradually gave in to allowing butter as a Lenten substitute for oil in the north, the practice eventually spread to the south, as it gave peasants an alternative to bad oil. Over time, the view of butter as “barbarian” fat gave way to its general acceptance. Italian recipes using butter began to appear, and by the sixteenth century butter had become something of a status symbol, especially among the Italian nobility living in cities in the south. The difficulty of obtaining and preserving a steady supply of butter in the hot clime made it all the more desirable as a luxury item. The church had unwittingly helped butter rise from the Italian food gutter to a place at the finest tavoli.

Disclaimer: I received this book from the publisher in exchange for an honest review.