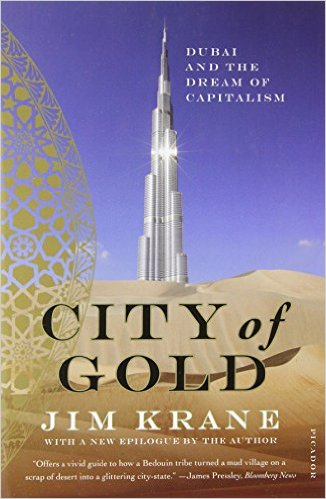 Thumbs up for City of Gold: Dubai and the Dream of Capitalism by Jim Krane. History/travel.

Astonishingly good. I would wish that all countries had books this riveting written about them, but I don’t think it’s possible; most places just won’t make your jaw drop this often. If this were a story about oil, I wouldn’t find it very interesting. But oil came late and comparatively little. Instead, the history of Dubai is primarily shaped by the ambition of the Makhtoum family to make their city among the best in the world. And I find ambition a fascinating thing. Monarchy has a major upside when you’ve been blessed with a string of smart rulers: development has zero lag time. There have been failures, and Krane covers those too, but lack of vision has never been a problem. Organized like a collection of small essays, Krane’s book follows Dubai from a small fishing village to its constantly changing space-age self.

“Show me the films with the tall buildings!” Zayed would thunder, and Jashanmal would hand over the red plastic View-Master, a child’s 3-D viewer with binocular eyepieces and a lever that turned a slide wheel. Sheikh Zayed, sitting in a sandy town with its camels and mud fort, would hold the View-Master up to the light, thumbing his way through slides of the Empire State Building, the Statue of Liberty, and the UN Headquarters. On other occasions Zayed wanted to see English gardens or the California redwoods, and Jashanmal would oblige.