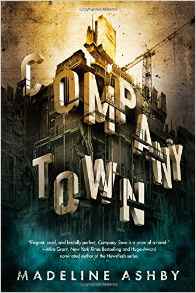 Thumbs up for Company Town by Madeline Ashby. Science fiction.

It seems strange that the word that would come to mind for a novel about a physically-disfigured young woman who works as a bodyguard for prostitutes on an oil rig in a gritty near-future Canada would be “sweet.” And yes, there’s murder and fighting and bombs, because it is after all a suspense story. But…I like Hwa, and the young man she ends up protecting is adorable, and…well…I can’t say more without getting spoilery. In addition to the excellent character work, occasional laugh-out-loud moments of wit, and suitably mystifying mysteries, there were—this is a big one—not one, but two I-completely-did-not-see-that-coming jaw-on-the-floor twists. That’s something I treasure, folks. I read Company Town in two sittings, and had I owned a copy of the hardback rather than a digital review copy, I probably would have hugged it in sheer readerly glee when I was done (since I couldn’t hug Hwa herself). Highly, highly recommended.

Hwa decided that this was probably not the right time to remind Lynch that she was a high-school dropout, and that while she was fluent in multiple languages, her mother-tongue was cursing. She had no time for corporate lore, or fairy tales, which were apparently the same thing these days. “Did someone … I don’t know … sell you this idea? Like maybe at a seminar, or something? Like a time-share?”