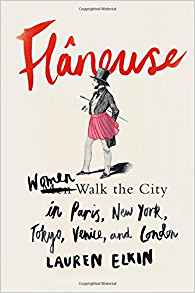 Thumbs up for Flaneuse: Women Walk the City in Paris, New York, Tokyo, Venice and London by Lauren Elkin. Sociology/Memoir.

A mishmash that works surprisingly well together: the history of women who walk in cities (flaneuses, to match the male term flaneurs); biography of some female writers like Jean Rhys, George Sand, and Martha Gellhorn; academic discussions on the social meaning of the suburb; the history of Paris; the plot of an art film; fragments of memoir from the author, which serve to keep it from being too academic. It’s a hard line to walk, that mixing of memoir—inherently intimate—and erudition—which lends a detached air whether it means to or not; I’m honestly not sure I’ve ever found an example I’ve found wholly successful. Still, while I can’t bring myself to consider Flaneuse a must-read for anyone, if the topic interests you, you will almost certainly get something out of it.

What we build not only reflects but determines who we are and who we’ll be. ‘A city is an attempt at a kind of collective immortality,’ wrote Marshall Berman in an essay on urban ruin: ‘we die, but we hope our city’s forms and structures will live on’. The opposite is true in the suburbs. They have no history and don’t think about the future; very little there is built to last. Posterity is irrelevant to a civilisation living in an ongoing, never-ending present, with as much care for the future or sense of the past as a child. In his classic 1961 study The City in History, Lewis Mumford describes the naivety of the suburbs, which sustain in their inhabitants a ‘childish view of the world’, a false impression of security, if not an outright political apathy. Terrible things happen elsewhere, but never here, not now, not to us. It’s the most natural parental instinct to want to give your children a better childhood than your own; but the generation of city dwellers who invented the suburbs blew past ‘better’ in their pursuit of an impossible social isolation. It is as if they were trying to give not only their children but themselves the childhood they never had. The suburbs present the world to their children as if padded in felt, as if life were something gradually accumulated through commercial transaction, store by store. Often American literature and films about the suburbs feature children and adults losing their innocence, surprised, unprepared, for how terrible life can be: The Virgin Suicides, American Beauty, Revolutionary Road, Weeds—all of these ask not only ‘is that all there is?’ but ‘is there really that, too?’