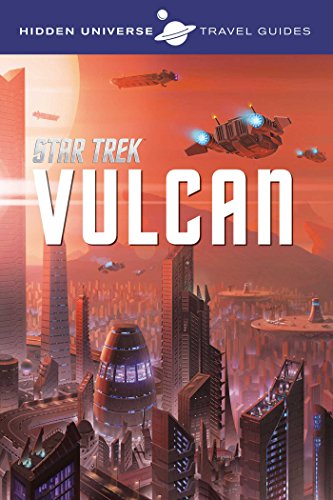 Neither thumbs up nor thumbs down for Hidden Universe Travel Guides: Vulcan by Dayton Ward. Science fiction.

A nicely done fake travel guide to the planet Vulcan, for hardcore Trekkies only. The author must have put in a lot of work. I appreciate the callbacks to a couple of the better novels, such as Uhura’s Song by Janet Kagan, as well as the reference to Mark Gardner’s Vulcan Language Institute (very politely sourced, even!). Still, a mild joke well-executed is still a mild joke. Maybe check it out of the library if you’re a huge Vulcanophile.

At T’Paal’s Chamber Music Pavilion, small, intimate gatherings of musicians employ disparate types of instruments–often representing different cultures and musical styles–and play for audiences ranging from the single digits to more than a hundred. One local troupe’s nightly performance of “The Journey Songs,” which describe the arduous migration of the Eeiauoan people from their ancestral home to their new world, routinely packs the place, so get there early.

I received this book free from the publisher in exchange for an honest review.