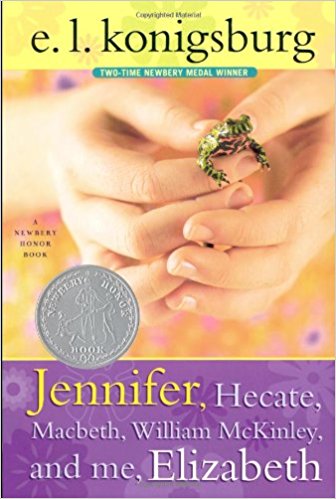 Neither thumbs up nor thumbs down for Jennifer, Hecate, Macbeth, William McKinley and Me, Elizabeth by E. L. Konigsburg. Children’s.

Some of these taboos seemed pretty hard. I told Jennifer that I didn’t think some of them made any sense. She told me that if I were looking for things to make sense, perhaps I wasn’t yet ready for promotion. I asked Jennifer if she always obeyed the taboos. She said that she always did—except that now she was allowed to light matches. I remembered that she had had to light a candle when I first became her apprentice. I was convinced that I could, I would, obey. I asked Jennifer for a list of the taboos so that I wouldn’t disobey by mistake. She said that witches don’t rely on lists. The list might get lose and fall into the hands of some good person and that would mean trouble for witches all over. She said that I must memorize the lit before school started the next day. She was afraid that back at school my mind would be all cluttered up with school stuff. Right then I had to learn them all; Jennifer checked me. She stood up and said to me, “You have reached the end of your apprenticeship. You are now a journeyman witch.”