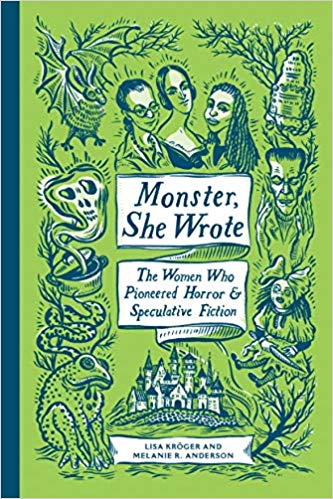 Thumbs up for Monster, She Wrote: The Women Who Pioneered Horror and Speculative Fiction by Lisa Kröger and Melanie R. Anderson. Literary history.

The publisher Quirk Books’s jawdropping and funny reference to vintage horror novels, Paperbacks from Hell, was one of my favorite books of 2017. When I saw they were publishing a history of women horror writers I got very excited. I was not disappointed! Yes, your obvious suspects are here (Wharton, Shelley, Rice, Jackson, etc) but also so many others I’ve never heard of. Each lady receives a biographical sketch and discussion of her themes and major works. The balance feels good—brief but informative. The style is conversational, a bit snarky, and packed with fascinating facts. If your knowledge of early female horror and speculative fiction writers feels shaky—in other words if you don’t know who Amelia Edwards, Mary Elizabeth Counselman, and Everil Worrell are—then you want this on your shelf.

Margery Lawrence produced two volumes of nonfiction in which she shared her theories on Spiritualism and on how the living could communicate with the dead. She referred to herself as a “ghost-hunter,” not an exaggeration given her active participation in haunted house investigations and seances with famous mediums of the day such as Eileen Garrett. Lawrence was a member of the Ghost Club, an organization that began in London in 1862 and still exists as a place for discussion and investigation of psychic and spirit phenomenon. Members have included Charles Dickens, Arthur Conan Doyle, Algernon Blackwood, W. B. Yeats, and Peter Cushing. In the 2015 Ubisoft video game Assassin’s Creed Syndicate, players can accept side missions investigating the paranormal for Charles Dickens and the Ghost Club. We think Margery Lawrence would’ve been a cooler choice.

I received a copy of this book from the publisher and chose to review it.