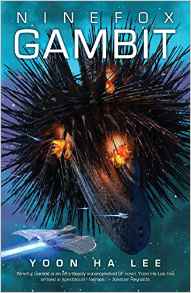 I have been looking forward to this book since before it even existed, because the author has written some short stories so good that even I (short story hater that I am) love them, and I couldn’t wait to see what he would do at novel length. Simultaneously, I was worried, because sometimes even very great short story writers, particularly the idea-driven ones, simply can’t sustain for three or four hundred pages. I should not have worried. Yes, this is still an idea-, rather than a character- or even plot-driven story—but they are such good ideas I don’t care: a long-dead, traitorous general is pulled out of cold storage and put into the main character’s head so they can together recapture a space fortress from rebels—and, oh by the way, weaponry in this universe follows different rules depending on what calendar you’re using. (It makes no sense but it’s brilliant, roll with it.) It is an ongoing testament to how fine a writer Lee is that I consistently adore his work, considering that I would put myself firmly in the category of readers who really, really need extensive character development, and this book is, in essence, one long battle sequence with occasional bickering. It is military science fiction written by a mathematician in the style of a poet. You wouldn’t think this could work, but it’s lovely.

Colonel Ragath had reported that the Radiant Ward was a wasteland no one wanted to enter except some corpse calligraphers bent on memorializing the event. Resistance had collapsed in the Umbrella Ward when Znev Stoghan pulled out his troops to deal with some internal crisis. The Drummers’ Ward was wracked by riots. Cheris had asked what the riots were about. Ragath had given her a jaundiced look, then said, “The generalized unfairness of life.”

I received this book for free from the publisher in exchange for an honest review.