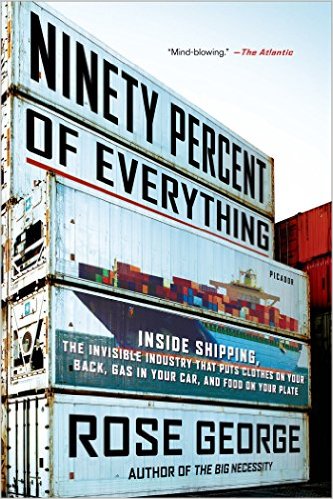 Thumbs up for Ninety Percent of Everything: Inside Shipping, the Invisible Industry that Puts Clothes on Your Back, Gas in Your Car, and Food on Your Plate by Rose George. Nonfiction.

I asked a friend who is a merchant marine (and avid and critical reader) how he, as an insider, thought Ninety Percent of Everything stood up. It’s one of the best available, he said, and then went on to rant about John McPhee’s Looking for a Ship (“they fed him all sorts of bullshit.”) I would have enjoyed this book even if I hadn’t had a friend in the industry. Let’s face it, if you read enough, you get to the point where you’re at least slightly familiar with most of the world’s weirdnesses: but there was stuff in here that I didn’t know about at all, and that’s a lovely thing to run across. Moreover, George is a good writer and a humble, compassionate observer of both the big picture and the small detail. I highly recommend this if you enjoy narrative nonfiction and have an appreciation for the absurd. Because oh, so much absurdity! Not only are danger and tedium constant bedfellows on these ships—some parts of the industry are downright worthy of Kafka:

[warning: the next paragraph contains a reference to horrible things happening to babies]

Anyway, open registry spokespeople say the distinction between good and bad registries [a registry defines what laws a ship is subject to and often has nothing to do with the nationality of the ship’s owner or its base of operations] is mistaken. They point out that many state-run flags—not defined as flags of convenience—have poorer standards than open registries on the White List. Liberia’s general counsel, Brad Berman, wrote that Liberia [a landlocked country which will register any ship], despite its desperate development statistics and GDP, “mandates that its registry is more than a small office manned by a clerk and a pet dog trained to carry registry documents to the local post office.” Liberia is certainly no longer in the dark time of the war criminal and former president Charles Taylor, who diverted flag registry income for his personal use, namely to fund rebels in neighboring Sierra Leone. (That is, rebels like Issa Sesay, who I met inadvertently one evening in the Rwandan prison where he is serving a fifty-year sentence, and we had a polite conversation about his chicken supper before I realized I was talking to a man whose troops had amputated the arms and legs of babies. Then I hoped the chicken choked him.)