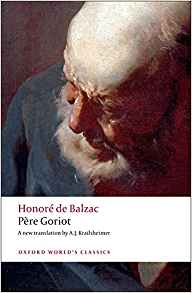 Thumbs up for Père Goriot by Honoré de Balzac. Literature.

Every time I think of Balzac I think of the West Wing episode in which Balzac is made fun of for his windiness. This is not wrong – at least in the first chapter. It was good that the introduction (by E.K. Brown) in my edition warned me that Balzac front-loads his books with lots of description, setting the scene and placing the characters within it before the story gets rolling. But roll it does. Père Goriot is a realistic novel, which is to say, it’s not about love or the solving of a mystery: it’s about money. Namely, not having enough of it. And to many of us, there’s frankly nothing so relatable as that. The two main characters, Père Goriot and Eugène de Rastignac, are both lodgers at Madame Vaquer’s cheap Paris boarding house. Old Goriot is on his way down, in the process of being bankrupt by his ungrateful daughters. Young Eugene is trying very very hard to climb his way up. That all sounds grim, and it is if you stop to think about it, but Balzac was writing for a popular audience, so he had to be entertaining. His characters are full of emotion and even Eugène, the social climber, isn’t bereft of human compassion. It’s a page-turner.

“If there’s one more piece of advice I have to give you, my dear fellow, it’s not to stand by your convictions any more than by your words. When you’re asked to, sell them. A man who boasts that he never changes his convictions is a man who undertakes always to move in a straight line, a ninny who believes in infallibility. There are no such things as principles, there are only events; there are no such things as laws, there are only circumstances; and the superior person unites himself with events and circumstances so that they will serve his interests. If there were fixed principles and laws, nations wouldn’t be changing them just as lightly as we change a shirt. A man isn’t required to be better than a whole nation. The man who has done the least for France is a national idol, venerated because he’s seen everything as in the color red, and all he’s good for, at most, is to be put in the machinery section over at the Conservatory and a label stuck on him reading La Fayette; while the prince who is stoned by everyone, and whose contempt for mankind is so great that he’ll spit out any oath that any one asks him for, this man, Talleyrand, was the one who prevented the partition of France at the Congress of Vienna. We should hang garlands on him, but we throw mud at him. Oh, I know how things go; I know the secrets of a great many men. Enough. I’ll have an unshakeable conviction the day I meet three men who agree about the realization of a principle, and I’ll wait a long time for that! You can’t find in the courts three judges who have the same opinion about a clause in the law. Let’s come back to my friend. He’d put Jesus Christ back on the cross if I told him to. Just one word from [me], and he’ll pick a quarrel with that rascal who doesn’t send so much as a hundred sous to his sister, and…”