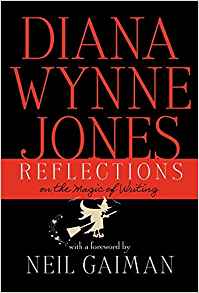 Thumbs up for Reflections: On the Magic of Writing by Diana Wynne Jones. Nonfiction/writing.

The problem of a collection of essays and speeches by one person on a single topic is immediately obvious: the content becomes repetitive. The story of Diane Wynne Jones’s early childhood is now ingrained in my mind, because I’ve read it five or six times. But it’s unfortunate that that is what I now first think of when I think of Reflections, because the non-repetitive bits are filled with such wisdom and cleverness and humor. Highly recommended for any fantasy writer–though you may want to skim rather than read cover-to-cover.

When I write, I find that when I am dealing with a difficult situation–particularly the kind of difficulty I mentioned earlier that is imposed from an outside source and before which children are mostly helpless–I nearly always make it funny. By this I do not mean unserious. To take an example from Black Maria, my latest book, Aunt Maria, the lady in the title, is a monstrous old lady who uses her age and infirmity to manipulate everyone around her. Worse than this, she plays on people’s guilt in order to force them into very narrow traditional roles according to sex–certain things are “women’s work” or “men’s business” only–and toward the end of the book she frankly admits to boring people on purpose, getting them so fazed with tedium that their minds are not able to work. In other words, Aunt Maria is in the business of closing down the imagination for her own ends. She eventually closes down the boy, Chris, into an animal–and there is a hilarious episode when Chris tries to get his revenge by invading a polite tea party in wolf form. I gave little whinnies of laughter while I was writing this, and I still find it funny, but it is serious all the same. Because Chris has been closed down, rendered a wild animal–you could say that Aunt Maria has made Chris a delinquent by her treatment of him.