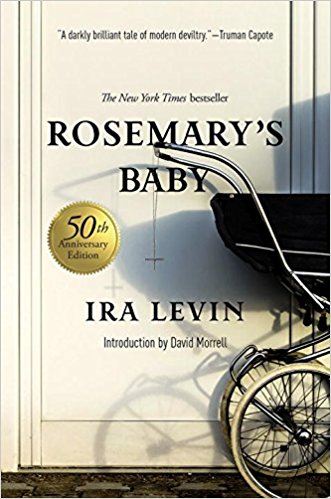 Thumbs up for Rosemary’s Baby by Ira Levin. Horror.

I don’t read horror, generally, but I came across a copy of this with the coolest cover and…I’m shallow. Also, I am rather fond of the name “Rosemary” as it’s the name of one of my heroines. And maybe there’s something in the name, because I can fully believe that my Rosemary, if laid up during pregnancy, would also (as does R. Woodhouse) undertake the reading of Gibbon’s Decline and Fall of the Roman Empire. But that’s neither here nor there. I can’t say what the book would be like if you’ve seen the movie, but the book is brilliant; if you’ve ever enjoyed psychological suspense, you should read it. Very little grotesque happens in it. The thing that makes it horrific is that while Rosemary believes she is in real life (and why shouldn’t she? You do too!) we know she is in a horror novel, and that those slightly weird things going on are in fact Really Really Bad. Horror as a function of genre epistemology, if you will. I particularly liked that nothing depended on Rosemary being stupid or a doormat. On the contrary, the ways that her intelligence fails are the unfortunately believable ways that even smart people fall prey to gaslighting by people they think care about them. The fact that this kind of manipulation happens every day in real life makes it more awful, not less. Also, after stressfully turning pages with a clenched stomach and trying to think of all the possible ways the book could turn out, I did not expect to laugh on the last page. I’m keeping a copy of this to loan out.

Rosemary came out of the Seagram Building and walked across the forecourt and down the steps and north to the corner of Fifty-third Street. She crossed Park Avenue and walked slowly toward Madison wondering whether [name redacted for spoilers] would live or die, and if he died, whether she (selfishness!) would ever again have anyone on whom she could so effortlessly and completely depend. She wondered too about Grace Cardiff, who sounded silver-gray and attractive; had she and [name] been having a quiet middle-aged affair? She hoped so. Maybe this brush with death–that’s what it would be, a brush with death, not death itself; it couldn’t be–maybe this brush with death would nudge them both toward marriage, and turn out in the end to have been a disguised blessing. Maybe. Maybe.