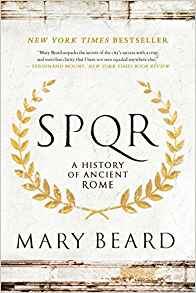 Thumbs up for S.P.Q.R.: A History of Ancient Rome by Mary Beard. History.

No, I am not one of those people who reads histories of Rome so I can point at current political events and say “See, this is just like that!” Comparing, say, ~240 years of American power to ~2,000 years of Roman power shows a problematic understanding of scale. It’s true, political corruption and megalomaniacs in power = bad news, but do you need to read about Rome to figure that out? Can’t we read about Rome for its own sake, for its marvelous mix of just-like-us but also actually-quite-different-from-us? What comes across so well in this easy-to-read overview by Mary Beard is the pleasure of studying history as history: a puzzle guessed at when we have only one in a hundred of the pieces. She doesn’t gloss over how little we really know, so those clues we do have (a tablet here, a grave here, a set of letters) feel, in her hands, rightfully valuable and intriguing. Studying Roman history is like understanding the modern age via fifty randomly-selected Reddit threads: and because of that, those things we do know, or can guess at, feel especially precious. If you’re going to read one large-scale history of Rome, this would be a great pick.

Whoever compiled the Oracles thought those ninety-two questions summed up the problems that were most likely to send people to the cheap local clairvoyant. One or two may suggest some relatively upmarket customers: ‘Will I become a senator?’ was hardly a concern for many – though it may have been the kind of fantasy question that ‘Will I marry a handsome prince?’ has been in the modern world, posed by those unlikely to meet, still less marry, a member of any royal family. Most of the questions focus on much more ordinary anxieties. Some, predictably, are about health, marriage and children. Number 42, ‘Will I survive the illness?’, must have been a common choice, though it is interesting that ‘Have I been poisoned?’ also appears on the list, a suspicion obviously not restricted to the imperial house. Number 24, ‘Is my wife having a baby?’, is nicely balanced by the guilty query ‘Will I soon get caught as an adulterer?’ and by ‘Will I rear the baby?’, pointing to the ancient dilemma of whether to expose a newborn. It is clear also that slaves were among the intended customers (‘Will I be freed?’ and ‘Will I be sold?’) and that travel was seen as one of life’s pressing dangers (‘Is the traveller alive?’ and ‘Will I sail safely?’). But the main preoccupation is money and livelihood, appearing in question after question: ‘Will I be able to borrow the money?’, ‘Will I open a workshop?’, ‘Will I pay back what I owe?’, ‘Are my belongings going to be sold at auction?’, ‘Will I inherit from a friend?’ The law, when it is present, tends to be a looming menace: from ‘Am I safe from prosecution?’ to ‘Will I be safe if someone informs on me?’