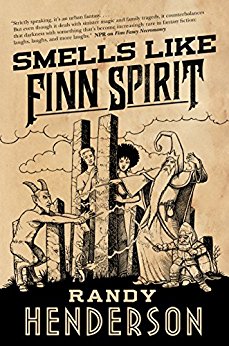 Thumbs up for Smells Like Finn Spirit by Randy Henderson. Fantasy.

A satisfying tying-up of all the loose ends from the first two books! And it retains the humor of the other books, thank goodness. I do wish it had been about fifty pages shorter: there did seem to be an awful lot of running around from one fight to another.

We had to drive up and over Deception Pass to reach the island, as the ferries did not run so late. Pete drove the family hearse, with Vee and Dawn in the passenger seat. Me, Sammy, and Fatima sat in the backseat, while Father and Verna insisted on lying down in the far back. Silene, Sal, and the rest of the brightbloods were taking the fairy paths to Whidbey, much faster than this agonizingly long two-hour drive. Unfortunately, while much faster than driving, the fairy paths were bad for human health in much the same way shotgunning a bottle of vodka found in the ruins of Chernobyl while walking a tightrope over an industrial taffy stretcher was dangerous. Well, dangerous for anyone not possessed of a Fey spirit, that was.