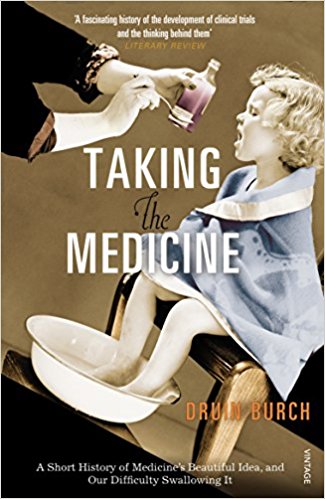 Thumbs up for Taking the Medicine: A Short History of Medicine’s Beautiful Idea, and Our Difficulty Swallowing It by Druin Burch. History.

If the history of medicine, in the specific sense of “things we take to feel better”–from opium to thalidomide, penicillin to aspirin–sounds at all interesting to you, read this book. That won’t apply to most of you, of course. But it was exactly the right opiate for me, and I binge-read the whole book in one day. The author–you get the sense he’s a doctor first and a historian second–has a pleasing impatience for quackery both historical and modern. In addition to being a history of specific drugs, Taking the Medicine is also, inextricably, the history of the scientific method. The majority of doctors throughout history have probably had the best of intentions, but that hasn’t stopped them from killing a lot more people than they’ve helped: a situation that changed only quite recently. Possible side effects of this book: a healthy passion for double-blind trials.

One of the papyri that Smith bought suggested mixing willow with figs, dates and beer to ’cause the heart to receive bread.’ (The Egyptians used ‘bread’ as a synonym for all sorts of fine things. Their daily greeting for each other was a cheerful wish for ‘Bread and beer!’ meaning pretty much everything in life that was good.) The historian of aspirin commented that ‘many of their superstitions, reasoning and treatments are based on concepts that are alien to us’. That is true, but it is not what really matters. The Egyptians considered their doctors and their medicines as being potent and effective. Their practices show something different. These papyri, the oldest proper medical instructions of our species, contained potions and salves and drugs whose effectiveness was a fantasy. Traditional knowledge of healing was not reliable. The first doctors in the world were frauds. This was a remarkable beginning for any profession, even more so for one that has always delighted in a special trust. For the next three and a half thousand years, little changed.