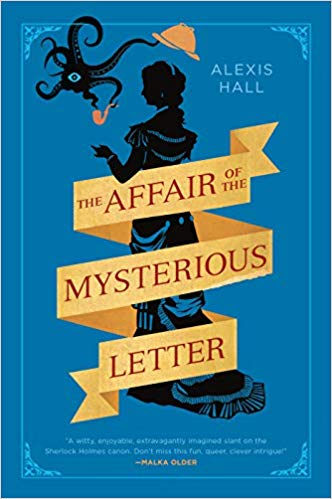 Thumbs up for The Affair of the Mysterious Letter by Alexis Hall. Fantasy.

This is one of the only books I’ve found that fill the void in my life created by the lack of any more Johannes Cabal. It’s a Sherlock Holmes/Lovecraft mashup narrated by a straightlaced ex-soldier who falls in with powerful, colorful, and not at all straightlaced consulting sorceress Shaharazad Haas. Never mind the detective plot; it’s simply an excuse to travel the worlds getting marvelously in trouble with pirates, vampires, parties, Elder Gods, and sharks. A picaresque pastiche is something I am more likely to hate than love, but Hall nails the moralistic Victorian narration to a T, and Captain John Wyndham’s staunchly priggish attitudes in the face of sheer absurdity and mayhem kept me laughing all the way through. Absolute delight.

Before I narrate the details of that fateful meeting, however, my editor suggests I should present for the benefit of my less cosmopolitan readers a brief introduction to the nexus city of Khelathra-Ven. I pointed out to him that there many texts available on the subject and that interested parties would be better served seeking out one of Ms. Zheng’s excellent travel guides. He was not moved by this argument, maintaining that the public in general mislikes being referred to secondary materials in the middle of a serialised narrative and that part of my duty as a chronicler is to describe not only events as they transpired but also the background against which those events occurred. Those already familiar with the great city may wish to turn immediately to the next chapter.

I received this book for free from the publisher and chose to review it.