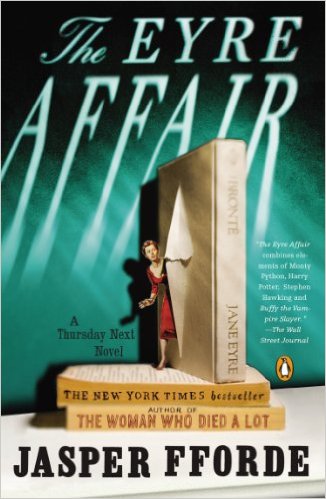 Thumbs up for The Eyre Affair by Jasper Fforde. Fantasy.

The Thursday Next novels (of which this is the first) are some of the few books I’ve read multiple times and plan to read again. They’re so stuffed with jokes about literature and history that they stand up well to re-reading; you’re never going to remember all that, and you’ll probably get more of the references each time. Describing what the heck they’re about isn’t easy, though. This volume introduces Thursday Next, modern (which is to say, single) Englishwoman, Crimean War veteran, time-traveler’s daughter, doting cloned-dodo owner, and LiteraTec officer. She is pulled away from her usual work of tracking down fake Shakespeare manuscripts in order to fight a villain whose perfidies include, among many other things, the kidnapping of Jane Eyre from the pages of her own story. Just…go with it. If you’re a book nerd, you should read these sooner rather than later because you might die without having read them, and that would be tragic.

As I said earlier, my father had a face that could stop a clock; and that’s exactly what happened one spring morning as I was having a sandwich in a small cafe not far from work. The world flickered, shuddered and stopped. The proprietor at the café froze in midsentence and the picture on the television stopped dead. Outside, birds hung motionless in the sky. Cars and trams halted in the streets and a cyclist involved in an accident stopped in midair, the lock of fear frozen on his face as he paused two feet from the hard asphalt. The sound halted too, replaced by a dull snapshot of a hum, the world’s noise at that moment in time paused indefinitely at the same pitch and volume.