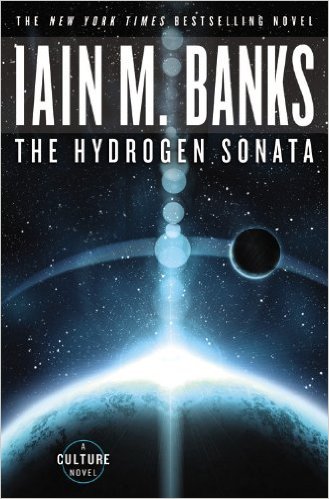 Thumbs up for The Hydrogen Sonata by Iain M. Banks. Science fiction.

My roommate described Banks’s Culture series perfectly: “Science fiction about spaceships who say ‘fuck’ a lot.” I hope, reader, that you’re okay with 900 pages in which said spaceships investigate a soon-to-be-completely-irrelevant point of record just because they’re curious? God, that sounds awful, doesn’t it? It’s not. In fact, I would read another 10,000 pages of Banks’s spaceships sending profane and snarky texts to each other. Luckily, there are a lot more books in the series.

Vilabier was thought to have been joking when he had claimed that the work was itself merely the first note in a vast and incrementally more complicated cycle that would grow to encompass the entirety of the periodic table. Regardless; after this simple beginning the work became furiously complicated and—initially at least, until playing techniques and prosthetic technology had sufficiently improved—almost unplayable. Initially, in this case, meant for several centuries. Many held that whether it was unplayable or not didn’t particularly matter; what did was that it was completely unlistenable. But that was, arguably, to take a somewhat doctrinaire attitude to what the word “listenable” meant.