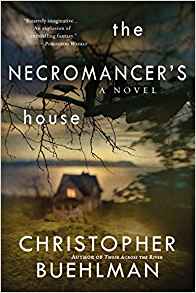 Thumbs up for The Necromancer’s House by Christopher Buehlman. Horror/fantasy.

This is a messy book, but messy in a pleasing way: if magic were real, you can believe it would be this. A magician and his apprentice, who met in Alcoholics Anonymous. (They love each other, but she’s a lesbian; awkward.) The magician has a boobytrapped house, a bunch of Russian spell books, a wicker butler with the heart of a collie and the head of a Salvador Dali painting, and a very good reason to have a boobytrapped house. Bad things happen, and it is extremely satisfying. If you enjoy literary fantasy set in a realistic modern day that is not “urban fantasy,” check it out. (Also, a great pairing for this book, in both style and content, would be Toby Barlow’s Babayaga.)

That was the point of the three-month-long spell he wove around [his house], burying mirror shards and the dried skins of chameleons in a circle, painting the walls with paint he’d hidden in public for a month and added octopus ink to, intoning both the Iliad and the Odyssey in Homer’s Greek to provoke benign blindness in those who climbed the hill and looked at the house. Sure, people who knew he was here could see it. But since he kept his address unlisted, the only people who knew the house was here were people he told and people from the neighborhood who knew the house before he bought it all those years ago.