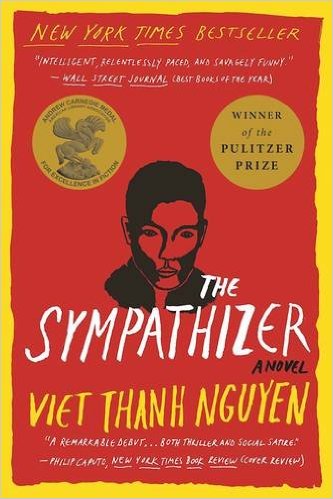 Thumbs up for The Sympathizer by Viet Thanh Nguyen. Literature.

The unnamed narrator, as he tells us in the first pages, can see two sides to all things. A hard trick to pull off for an author, but it flies. The narrator is a Communist (the story begins just before the fall of Saigon) though he to all appearances works doggedly on behalf of the Southern Vietnamese government-in-exile. Technically speaking, this is satire, but when reality is absurd, only slight exaggeration is necessary for comic effect: the sections in which he is the “native advisor” on an Apocalypse Now-equivalent movie will make you cry-laugh. Sometimes brutal, often hilarious, though thankfully not at the same time. If you like your humor very dark and your prose dense and fizzy, this is the book for you.

At the end of our discussions and meals, I lit the General’s cigarette and he stared into space, forgetting to smoke the Lucky Strike as it slowly consumed itself in his fingers. In the middle of April, when the ash stung him awake from his reverie and he uttered a word he should not have, Madame silenced the tittering children and said, If you wait much longer, we won’t be able to get out. You should ask Claude for a plane now. The General pretended not to hear Madame. She had a mind like an abacus, the spine of a drill instructor, and the body of a virgin even after five children. All of this was wrapped up in one of those exteriors that inspired our Beaux-Arts-trained painters to use the most pastel of watercolors and the fuzziest of brushstrokes. She was, in short, the ideal Vietnamese woman. For this good fortune, the General was eternally grateful and terrified. Kneading the tip of his scorched finger, he looked at me and said, I think it’s time to ask Claude for a plane. Only when he resumed studying his damaged finger did I glance at Madame, who merely raised an eyebrow. Good idea, sir, I said.