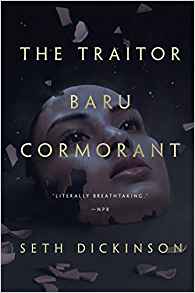 Thumbs up for The Traitor Baru Cormorant by Seth Dickinson. Fantasy.

I went into this knowing three things. First, that it is a fantasy in which the main character is an accountant (this is, for me, a plus). Second, it got great reviews from people whose opinions I trust. Third, not just one but several of the blurbs on the dust jacket include the word “brutal.” When I was early in my first late-night marathon read—that is, before the really brutal stuff started happening—it occurred to me that it might easily lend itself to a humorous plot summary: “Young woman becomes an accountant for the Evil(ish) Empire in order to legalize gay marriage.” At the end, when I have been reduced to a gibbering and yet somehow gleeful wreck, all I can do is wave the hardback twitchingly in your general direction and tell you that if (a) you like zero-magic political fantasy but don’t need Martin’s bazillion characters and (b) you understand how inflation works and (c) you are capable of sufficient ethical complexity to see why someone might do terrible things for a good cause, you should stop reading this blog and get a copy of Traitor RIGHT NOW. Go. Go. Shoo. Go get it. ((indistinct gibbering))

“Jurispotence Xate, Your Excellence, I am honored,” Baru said, and marked the woman an enemy: her greeting had started at foreign, gone to woman, then young, and last of all to a reminder of what Xate had done. It was a subtle strike, maybe only a petty snipe from a petty mind. More likely a probe to test Baru’s vigilance.