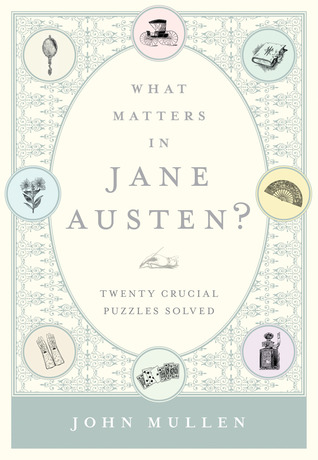 I will laugh gently over the world “crucial” in the title. Crucial, no. Some of the topics touched upon in these essays are rather silly. But most are illuminating in some way, and when they are good they are very interesting indeed. I particularly enjoyed the discussion of “What Games do Characters Play?” (which refers to cards, not psychological games). Unlike much Austen scholarship, this is a very approachable book. I will add the caveat that you had already be familiar with all of her major works. If you are an Austenite, check it out of the library, perhaps, and you will gain some new perspectives.

Jane Austen makes her characters play games because, we might say, this was one aspect of the social world she knew. She made her characters play the games –especially the card games –that she played herself. Yet she is up to something else as well. Her books do not just feature games because, in her day, these filled the long evenings in provincial England. In her novels, games serve a novelist’s purposes. Because most of her first readers would have been able to recognise the particular games that are mentioned, they would have been able to see the arrangements of space and the conversational groupings that the games produced. For the first purpose of games in her novels is to divide and dispose her characters. Card playing joins people and separates them. Describing a sociable evening in Kent to her sister, Austen reported that ‘. . . one Card Table was formed, the rest of us sat & talked’ (Letters, 55). Some play cards, and some do not; or some play one game, and some another. In a different letter, Austen describes how fourteen sat down to dinner at Ashe Rectory, home of the Lefroy family, in November 1800. After the meal ‘There was a whist & casino table, & six outsiders’ (the whist and casino games each taking four players) (Letters, 27). The outsiders have to entertain themselves. ‘Rice & Lucy made love, Mat: Robinson fell asleep, James and Mrs Augusta alternately read Dr Jenner’s pamphlet on the cow pox, & I bestowed my company by turns on all’.