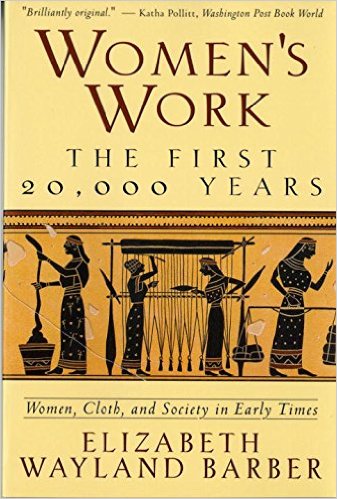 Thumbs up for Women’s Work: The First 20,000 Years – Women, Cloth, and Society in Early Times by Elizabeth Wayland Barber.

Curse you, Amazon, for knowing my desires before I do. I was so good, wasn’t I, when you recommended this to me, and I ordered it from the library? You just knew that after I read it I would come straight back to your electronic embrace and order a copy for myself, because oh did I need a copy for myself. Hey, reader. Do you like social histories? Women’s history? You might as well just order it now. Just go. Don’t mess around.

Sir William Matthew Flinders Petrie had dug up this shirt during his 1912-1913 seasons at the site of Tarkhan. Even as far back as the First Dynasty, dead men and women embarked for the next world with linens and other useful goods piled high around their coffins. In the case of tomb 2050, robbers had already ransacked the burial in ancient times, chucking a good deal of linen out into the hot, dry sand, which soon blew over the cloth and protected it rather well until uncovered by Petrie’s spade. A meticulous British archaeologist, Petrie concentrated on recording the minutest details of Egyptian daily life at a time when most museums and scholars prospected only for splendid works of ancient art and discarded the rest of what they uncovered (see Chapter 12). As with so much else of a homely nature that he found, and that no one else wanted, he tucked the ragged prize into his study collection and took it back to University College London. There it hibernated until 1977, when two women curators interested in textiles found it as they began to sort through the heaps of dirty “funerary rags” in storage. It proved a fine piece, with seams, fringes, and elaborate pleating largely intact after five thousand years. Moreover, creases at the elbow still make the long, slim sleeves bend forward at a comfortable angle, showing clearly that the shirt was actually worn. In fact, it was found inside out, just as the wearer had left it after stripping it off over the head. The linen rectangles from which the tunic was stitched together had been woven with a fringe of weft running along one edge, and these edges had been placed so as to adorn the neck opening and the side seam. What’s more, the linen had been carefully pleated in row upon row of tiny tucks, not sewn but simply pressed in, to give it both elasticity and a trim fit. All this before 3000 B.C.!