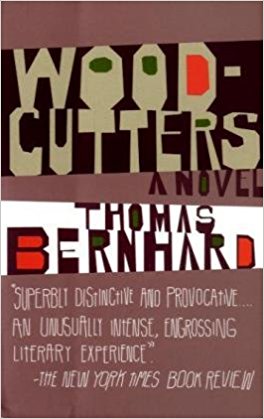 Thumbs up for Woodcutters by Thomas Bernhard. Literature.

A friend of mine who is a huge Bernhard fan loaned me this. It was both enjoyable, and the best soporific you can imagine: three pages a night were guaranteed to put me right to sleep. It is one long paragraph of the internal reminiscences of a man at a party as he contemplates the hosts, the other guests, his own history, the theater, and a friend whose funeral he attended earlier in the day. Mostly with an emphasis on how much he detests all these things. More entertaining than it sounds—assuming you’re the sort of reader who is okay with books consisting of only one paragraph.

[…] Every now and then I saw the cook appear from the kitchen and stick her head around the door of the music room to find out whether she could start serving supper, but the actor had still not arrived. Auersberger’s wife was now sitting in one of those slender Empire chairs whose backs consist simply of a lyre carved out of walnut, doing her best to keep the guests happy. Most of them were smoking and, like me, drinking champagne, while at the same time nibbling at the snacks that the hostess had disposed all around the apartment in little dishes made of fine Herend porcelain. There was one next to me, but having always had an equal dislike for Herend porcelain and pre-dinner snacks, I did nor eat any. I have never been partial to savory snacks, and certainly not to the Japanese variety that it has recently become fashionable to serve at all Viennese receptions. It really is an impertinence, I said to myself, to make us all wait for the actor, to demean all the guests, including myself, by turning us into a stage set for this man from the Burgtheater. At one point Auersberger remarked that he detested the theater. Whenever he had had more to drink than his wife permitted, he would suddenly reveal his innermost self, and on this occasion he suddenly started inveighing against the actor, who had not even arrived, calling the Burgtheater a pigsty (admittedly not without justification) and the actor himself a megalomaniac cliché-monger, but his wife immediately rebuked him, rolling her eyes and telling him to go back to the piano where he belonged and keep quiet. They haven’t changed, I said to myself, sitting in the wing chair: she’s anxious to preserve the harmony of her artistic dinner, and he’s threatening to destroy it. […]