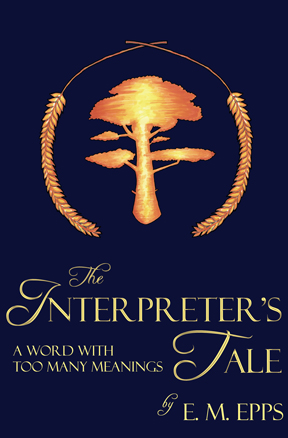 I’m by no means the world’s worst self-promoter – there are far too many authors who would rather commit seppuku than compose a tweet about their own work for me to be the worst – but it is true that I probably should have at least mentioned, on my own blog, that I published a novel a while back. Er, a year ago.

If you were subscribed to my email newsletter at the time, you would have heard a hint of this, but otherwise I somehow failed to make any sort of announcement whatsoever.

So yeah. A novel. Announcing that now.

As you can guess from the title, The Interpreter’s Tale, the main character, Eliadmaru, is a diplomatic interpreter. But, unlike the real world in which such people spend a lot of time in little glass booths with headphones on, he is in the thick of things, rubbing shoulders with royals and sorceresses. There are so few (vanishingly few) books written from the perspective of interpreters or linguists of any kind, I worked hard to do that aspect of it justice – without bogging things down in details for those who just want a good story of intrigue and magic.

From the back cover:

As a linguist and military interpreter, Eliadmaru Faraa has always been a supporting character in other people’s stories. And so far, that’s been just fine with him: it’s words he loves, not swordplay or affairs of state.

Now he’s been asked for help by the Emperor’s nephew. Together, along with an irritating ambassador and a sorceress with a secret and a high sex drive, they aim to save an ailing princess and stop the trade of weapons to the border war.

Which is more difficult—not disgracing himself during a touchy negotiation, winning back his boyhood sweetheart, or translating his lovelorn teenage boss’s amateur poetry?

If you think you might like it but need some convincing, check out the fantastic reviews it’s been getting on Amazon

or read the beginning on my website. Currently the paperback is $11 from Amazon and the e-book is $4.99 (Amazon or Smashwords).

If you’ve ever wondered what it’s like to be a polyglot, The Interpreter’s Tale will introduce you to a fantastical world of intrigue, trouble and tongue-play. If you are a polyglot, you can commiserate with Eliadmaru constantly being the only one in the room who can understand what everyone else is saying. Extremely fun read!
—David J. Peterson, creator of the Dothraki language for HBO’s Game of Thrones and author of Living Language Dothraki